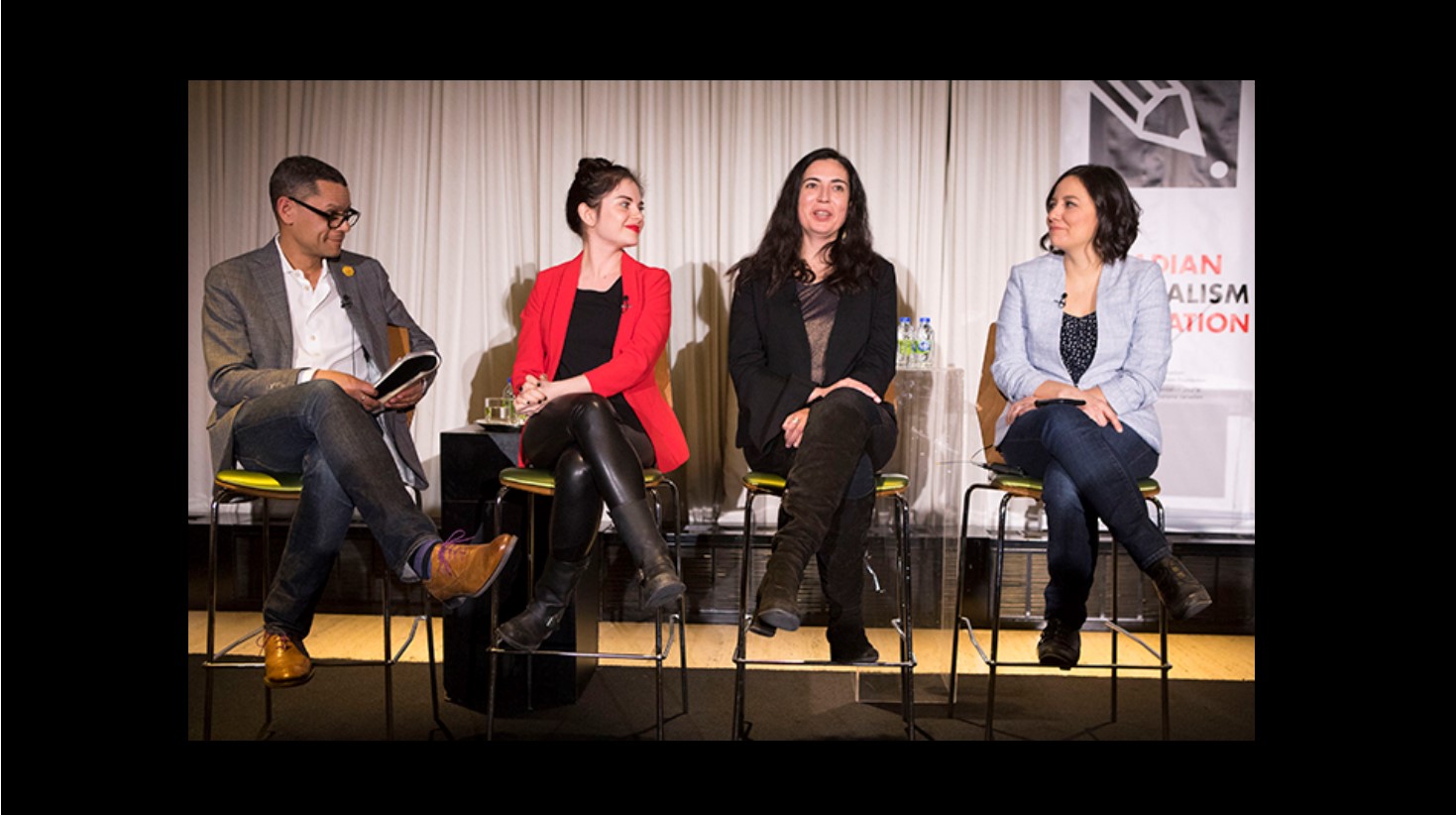 – View the photos
– Listen to the podcast
– View the video

They are the journalists who produced some of Canada’s most recent poignant and powerful stories. What challenges lie behind reporting these important pieces? From the first notion of an idea to its final fruition—and even after a story airs or is published—hear about the process and its results from three of this country’s top investigative journalists.

Over the span of eleven years, seven Indigenous high school students died in Thunder Bay, Ontario. The seven were hundreds of miles away from their families, forced to leave home and live in a foreign and unwelcoming city. Award-winning journalist Tanya Talaga delves into the history of this northern city that has come to manifest Canada’s long struggle with human rights violations against Indigenous communities.

Robyn Doolittle is an award-winning journalist and author. She joined the Globe and Mail’s investigative team in April 2014 after spending nearly a decade reporting for the Toronto Star. Doolittle’s probe of former Toronto Mayor Rob Ford’s troubled personal life won the 2014 Michener Award and her book on the subject, “Crazy Town; The Rob Ford Story” was a national bestseller. At the Globe, Doolittle’s investigation into how Canadian police services handle sexual assault cases has prompted a national overhaul of policy, training and practices around sexual violence, with police services vowing to review thousands of previously closed cases. @robyndoolittle

Tanya Talaga has been a journalist at the Toronto Star for twenty years, covering everything from general city news to education, national health care, foreign news, and Indigenous affairs. She has been nominated five times for the Michener Award in public service journalism. In 2015, she was part of a team that won a National Newspaper Award for Gone, a series of stories on Missing and Murdered Indigenous Women and Girls. She is the 2017–2018 Atkinson Fellow in Public Policy. Talaga is of Polish and Indigenous descent. Her great-grandmother, Liz Gauthier, was a residential school survivor. @TanyaTalaga

Connie Walker is an award-winning investigative reporter and host of the CBC News podcast, Missing & Murdered. In 2017, Missing & Murdered: Who killed Alberta Williams? won the RTDNA’s Adrienne Clarkson Award and was nominated for a Webby Award. Walker and colleagues at the CBC’s Indigenous Unit, won multiple awards including the 2016 Canadian Association of Journalists’ Don McGillivray investigative award, a Canadian Screen Award and the prestigious Hillman Award for its “Missing & Murdered: The Unsolved Cases of Indigenous Women and Girls” interactive website. Walker is from the Okanese First Nation, in Saskatchewan. @connie_walker

Matt Galloway is the host of Metro Morning on CBC Radio One, 99.1 FM, the top rated morning radio program in Toronto. He is also the co-host of Podcast Playlist on CBC Radio One. He has been working at CBC Radio for more than 10 years. He has also anchored CBC Radio’s coverage of the 2008 Summer Olympics live from Beijing, the 2010 Winter Olympics in Vancouver, the 2014 Winter Olympics live from Sochi, and the 2010 FIFA World Cup. For four consecutive years, he was voted Top Radio Personality in Toronto by the readers and editors of NOW Magazine. He was also named a Toronto Hero of 2011 by Torontoist, and a Mensch of the Year for 2011 by The Grid magazine.  @mattgallowaycbc