Funny Fake News: A Conversation with The Beaverton 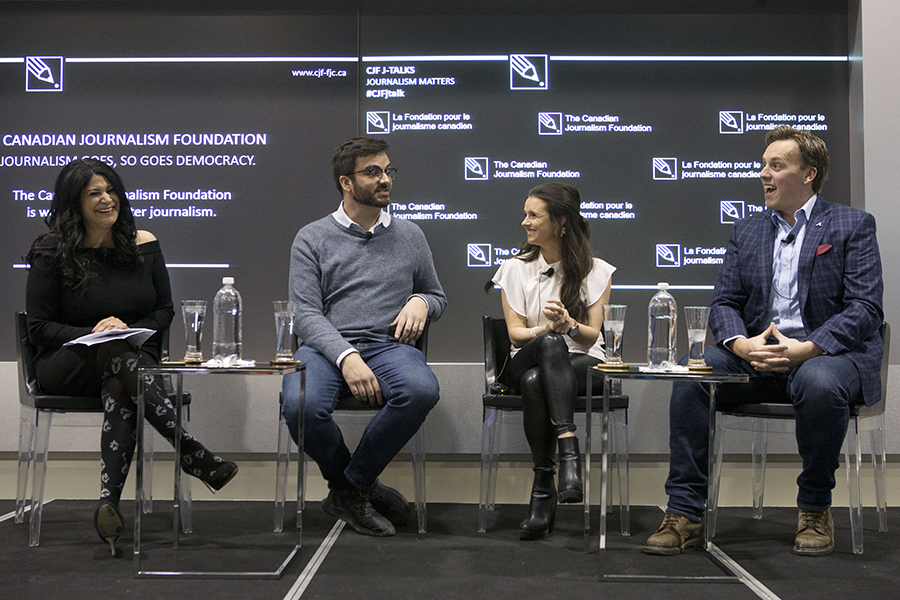 What’s the difference between fake news and satire? If you don’t know, The Beaverton can explain it. The weekly TV satirical news show on The Comedy Network (adapted from the popular website TheBeaverton.com) pokes fun at Canadian and world events with deft, scathing scrutiny.  But what is the role of satire in journalism? And is it even more relevant in these noisy, nonsensical times? What issues are simply too sensitive to address—if any? This conversation features The Beaverton co-anchors Emma Hunter and Miguel Rivas, along with show co-creators, co-showrunners and co-executive producers Luke Gordon Field and Jeff Detsky. Adrienne Batra, editor-in-chief of the Toronto Sun, moderates.

The Beaverton has quickly become the funniest – and most biting – source of Canadian satire. Its headlines have been misinforming Canadians across the country (and world), while also providing some of the most insightful social commentary found anywhere. Now, in its first book, The Beaverton looks back over Canada’s past to tell the story of how we became the ridiculous nation we are today. Part mock-history, part fake-scrapbook, The Beaverton Presents Glorious and/or Free is a hilarious and entertaining stab at our national myths and legends. And, like all great satire, it’s funny because it’s true.

MIGUEL RIVAS is co-anchor of The Beaverton. A journalist in the rich tradition of Cronkite and McAvoy, Miguel always asks himself three things when considering a potential story: is it important, is it properly researched, and will Drake like it? He is a founding member of the Canadian Comedy Award nominated sketch troupes Tony Ho and Get Some as well as the co-creator and co-host of the Canadian Comedy Award winning sketch show RAPP BATTLEZ. Miguel has appeared on SPACE RIDERS: DIVISION EARTH, MEET THE FAMILY, THE NEXT STEP and has starred in and directed multiple short films with his sketch group Tony Ho.

EMMA HUNTER, co-anchor of The Beaverton, offsets Miguel’s gravitas and sarcasm with irreverence and a defiant attitude. Her excited, frenetic energy is contagious on set and screen. Emma represents the low-attention-span of BuzzFeed-style new media, which sometimes puts her in conflict with Miguel. Emma recurs on CBC’s Mr. D and has guest starred on THE ROYAL CANADIAN AIR FARCE New Year’s special and Canada 150 specials. Recent credits include Mary Goes Round that premiered at TIFF 2017, Crave TV’s CSA winning LETTERKENNY, HOW TO BUY A BABY, SAVE ME, Goon: Last of the Enforcers, and a sketch pilot for NBC Universal.

LUKE GORDON FIELD is co-creator, co-showrunner, and co-executive producer of the Beaverton television series and editor-in-chief of The Beaverton website. After attending law school at Osgoode Hall, Luke took the next logical step: becoming a stand-up comedian and comedy writer. As a stand-up he has had the pleasure of touring all over Canada (and very specific parts of America), playing NXNE, JFL42 and Sketchfest, and working with amazing comedians like Wyatt Cenac and Maria Bamford. His greatest passion remains the Beaverton, which he has run since 2012.

ADRIENNE BATRA is the editor-in-chief of the Toronto Sun, a position she assumed in 2015. She is also a CJF board member. She has appeared on Fox Business News, CNN and BBC and is a frequent contributor on Global News and CTV News Channel, CBC, CP24 and AM640. Batra hosted her own TV show on Sun News Network. She has also served as the Comment Editor and columnist for the Toronto Sun and political commentator on Newstalk 1010. In 2010, Batra was the Director of Communications for the Rob Ford for Mayor campaign, and moved on to serve in the Office of the Mayor as Ford’s Press Secretary. Batra also served in the Canadian Armed Forces, obtaining the rank of Lieutenant.