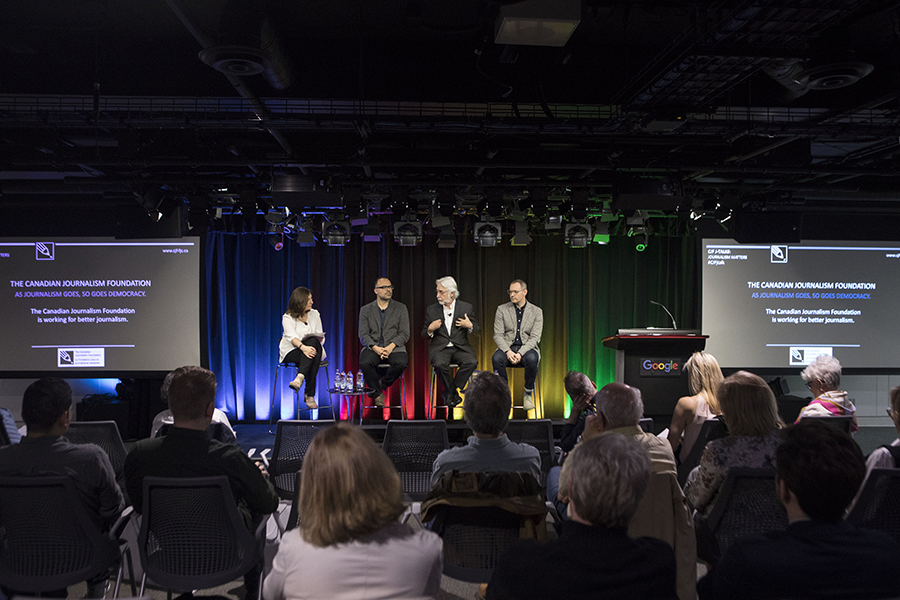 In an age of misinformation, disinformation, AI and media manipulation, how can news organizations and platforms like Google build trust with audiences? Join our speakers: Richard Gingras, vice-president of news at Google, and Craig Silverman, media editor with BuzzFeed News; Hossein Derakhshan is an Iranian-Canadian writer and researcher on a joint Harvard Shorenstein and MIT Media Lab fellowship who recently co-authored the report Information Disorder, commissioned by the Council of Europe; and moderator Anna Maria Tremonti, host of CBC Radio One’s The Current.

Richard Gingras is Vice President of News at Google. In that role he guides Google’s strategies relating to the media ecosystem and oversees many of Google’s news and media related products. Richard was a key instigator of the recently-announced Accelerated Mobile Pages (AMP) project, an effort to make Web content instantaneous and in doing so, preserve the vitality, utility, and openness of the Worldwide Web. He also helped found the Trust Project, a global effort within the journalism community to insure that high quality journalism is recognized for the credibility it deserves. @richardgingras

Craig Silverman is media editor for BuzzFeed News. Prior to this role, he was the editor of BuzzFeed Canada, which launched in 2015. He is also the founder of Emergent.info, a real-time rumor tracker that was developed as part a fellowship with the Tow Center for Digital Journalism at Columbia University. Craig previously founded Regret the Error, a blog about media accuracy and the discipline of verification. It’s now part of the Poynter Institute for Media Studies, where he serves as adjunct faculty. Prior to Poynter, he was part of the team that launched OpenFile, an online news startup the delivered community-driven reporting in six Canadian cities. Craig edited the Verification Handbook and the Verification Handbook For Investigative Journalism from the European Journalism Center. He is a the former managing editor of PBS MediaShift and has been a columnist for The Globe And Mail, Toronto Star, and Columbia Journalism Review. His journalism and books have been honored by the Mirror Awards, U.S. National Press Club, National Magazine Awards, Canadian Online Publishing Awards, and Crime Writers of Canada. @CraigSilverman

Hossein Derakhshan is an Iranian-Canadian writer and researcher, and a pioneer of blogging in Iran. He is currently on a joint Harvard Shorenstein and MIT Media Lab fellowship. He recently co-authored the report Information Disorder, commissioned by the Council of Europe, with Claire Wardle. He spent six years in prison in Iran from 2008, which inspired an essay on the demise of blogs and “The Web We Have to Save” (Matter, 2015). His current research is focused on the theory and socio-political implications of digital and social media. His writings have appeared in Libération, Die Zeit, the New York Times, MIT Technology Review, and The Guardian. He studied Sociology in Tehran and Media and Communication in London.

Anna Maria Tremonti has been the host of CBC Radio One’s The Current since it first burst onto the airwaves in November of 2002. She brings a mix of hard-edged journalism and hard-won empathy to a 90-minute program that tackles everything from the politics of the day, to the changes that affect our society, to the stories of individuals whose personal journeys and traumas affect us all. The Current marked her return to radio after 19 years with CBC Television, including two years as a host of the flagship investigative program the fifth estate. For nine years she was a foreign correspondent for The National, based in Berlin, London, Jerusalem and Washington. Her assignments abroad included ongoing coverage of the war in Bosnia, the fall of communism, the Israeli-Palestinian conflict, as well as the politics of the Arab world, Europe and the United States.Prior to that, Anna Maria reported from Parliament Hill, and worked as a reporter in Nova Scotia, New Brunswick and Alberta.She began her career in private radio, at CKEC in New Glasgow Nova Scotia. @TheCurrentCBC