State of Media: Survival Strategies in the Age of Misinformation 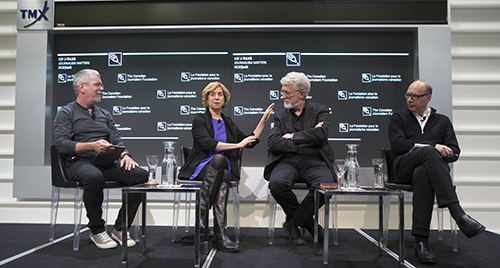 Journalists and media organizations around the world are under siege from misinformation fed by social media and an antagonistic U.S. president. How should journalism and democracy respond to this dual challenge? How can journalists ensure truth overrides false information? How should they respond to public attacks and historic levels of mistrust? At the same time, many media are seeking sustainable business models and some are asking: can blockchain technology provide security for the future of journalism?

Join a wide-ranging conversation on these issues with prominent journalism thought leaders: Jeff Jarvis, director of the Tow-Knight Center for Entrepreneurial Journalism at the City University of New York; Jay Rosen, associate journalism professor at New York University; and Vivian Schiller, CEO of the Civil Foundation, which makes philanthropic grants in support of journalism and upholds the ethics of Civil, a blockchain-based platform that supports a global community of quality newsrooms. This conversation will be moderated by Mathew Ingram, chief digital writer with the Columbia Journalism Review.

Jeff Jarvis is the Director of the Tow-Knight Center for Entrepreneurial Journalism and Professor at the Craig Newmark Graduate School of Journalism at the City University of New York. He is a national leader in the development of online news, blogging, the investigation of new business models for news, and the teaching of entrepreneurial journalism. He writes an influential media blog, Buzzmachine.com. He is author off four books, including Geeks Bearing Gifts: Imagining New Futures for News (CUNY Journalism Press, 2014). Prior to joining the Newmark J-School, Jarvis was president of Advance.net, the online arm of Advance Publications, which includes Condé Nast magazines and newspapers across America. He was the creator and founding managing editor of Entertainment Weekly magazine and has worked as a columnist, associate publisher, editor, and writer for a number of publications. He was named one of the 100 most influential media leaders by the World Economic Forum at Davos. @jeffjarvis

Jay Rosen has been teaching journalism at New York University since 1986. From 1999 to 2005 he served as chair of the program. Rosen is the author of PressThink, a blog about journalism and its ordeals (www.pressthink.org), which he introduced in 2003. He is the author What Are Journalists For? (Yale University Press) about the rise of the civic journalism movement during the pre-internet era. In 2008 he was the co-publisher, with Arianna Huffington, of OffTheBus.net, which allowed anyone who was interested to sign up and contribute to campaign coverage for the Huffington Post. He is currently serving as “ambassador” to the American market for the Dutch site, De Correspondent as it looks to expand to the U.S. In 2017 he became director of the Membership Puzzle Project, funded by the Knight Foundation and Democracy Fund. It studies membership models for sustainability in news. Rosen is also an active press critic with a focus on problems in the coverage of politics. @jayrosen_nyu

Vivian Schiller is a longtime executive at the intersection of journalism, media and technology. She is the CEO of the Civil Foundation, which makes philanthropic grants in support of sustainable journalism, and helps uphold the journalism ethics and standards of Civil, the decentralized marketplace for sustainable journalism. Prior to joining Civil, Vivian held a number of executive roles in the media industry. She was the Global Chair of News at Twitter. In this role, she led the company’s strategy for news and partnership with journalism organizations and the news publishing ecosystem. Before that Vivian held leadership roles at NBC News, NPR, NYTimes.com, Discovery Times Channel and CNN Productions. Schiller is a member of the Council on Foreign Relations; and a Director of the Scott Trust, which owns The Guardian. @vivian

Mathew Ingram is Columbia Journalism Review‘s chief digital writer. Previously, he was a senior writer with Fortune magazine. He has written about the intersection between media and technology since the earliest days of the commercial internet. His writing has been published in The Washington Post and the Financial Times as well as Reuters and Bloomberg. @mathewi